Beyond bitcoin: What all can we use blockchain for?

Blockchain has quickly become the talk of the town—and understandably, that talk typically revolves around bitcoin and other popular types of cryptocurrency. But we can actually use blockchain to solve problems across loads of industries, far beyond finance.

In simple terms, blockchain is just a list of data records that functions as a decentralized, digital list of assets (ledger). The data is assembled into sections (or “blocks”), which are then securely, sequentially arranged by cryptography. This is a hot commodity for companies wanting to digitize their assets—be them tangible ones, like real estate or artifacts, or intangible ones, such as usage rights or intellectual property. In short, blockchain keeps track of your assets in a safe and digital way.

The music industry consistently faces technical issues such as the fair distribution of loyalties, lack of transparency, and ownership rights. Blockchain uses smart contracts technology to tackle this issue by creating a decentralized database of music rights. Simultaneously, it uses DLT (distributed ledger technology) to ensure artists are paid in real time according to various factors such as number of streams recorded in the ledger per day.

A good example of this is Mediachain, a startup based in New York whose strategy is to use blockchain to collect and organize timestamps and data about individual digital media assets. The idea was a hit—in 2017 the company was acquired by Spotify, who now use blockchain to provide artists with more accurate numbers on attribution and plays.

Even Mr. Worldwide wanted in on the perks of the technology. In 2018, rapper and singer Pitbull launched a global competition in which participants had to devise a business idea that used blockchain to decentralize the music industry.

The winning idea came from Singapore-based startup HyperValence, who described themselves as a “decentralized stock market on the Ethereum network, for betting on musicians’ hype factor using aspects of game theory and community building.” 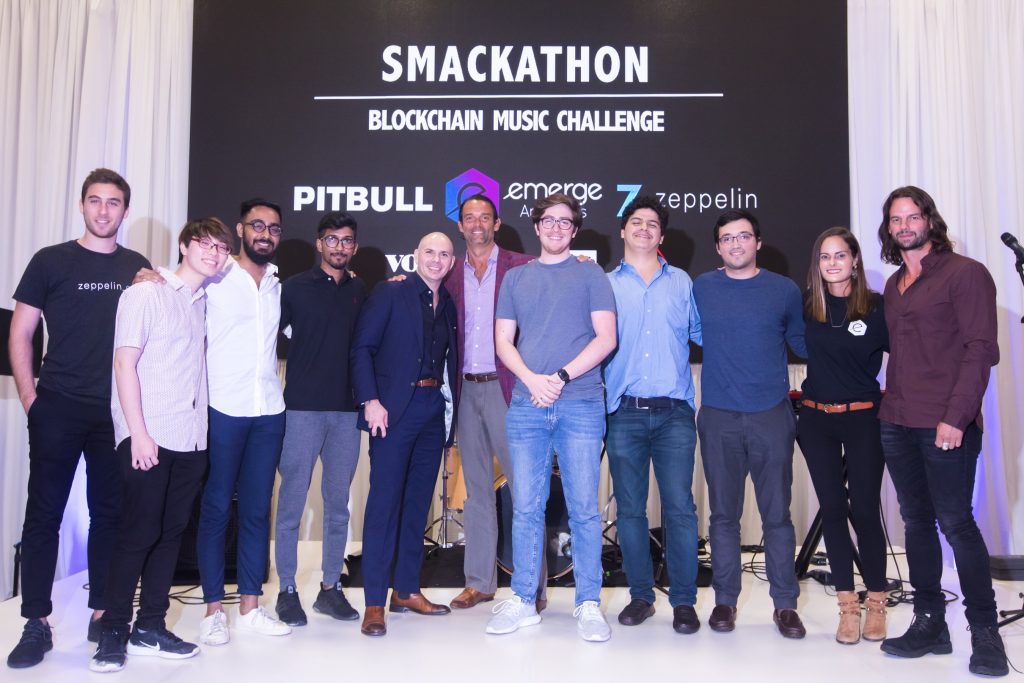 The issue of fake news persists in the media industry. But have no fear, blockchain is here. Safe.press, a platform for news certification, is based on a shared registry which “saves each [piece of] news in its blockchain ledger, safely hosted by all members of the consortium.” This provides each piece of news with a distinct, secure digital footprint, protecting its IP from manipulation.

Among its members is telecom giant Orange. If you visit its website, on each press release, you will see a green “safe.press” badge. If you click on the badge, it displays a certificate of authentication confirming that the piece of content has been recorded by blockchain, also providing it with a unique ID number. 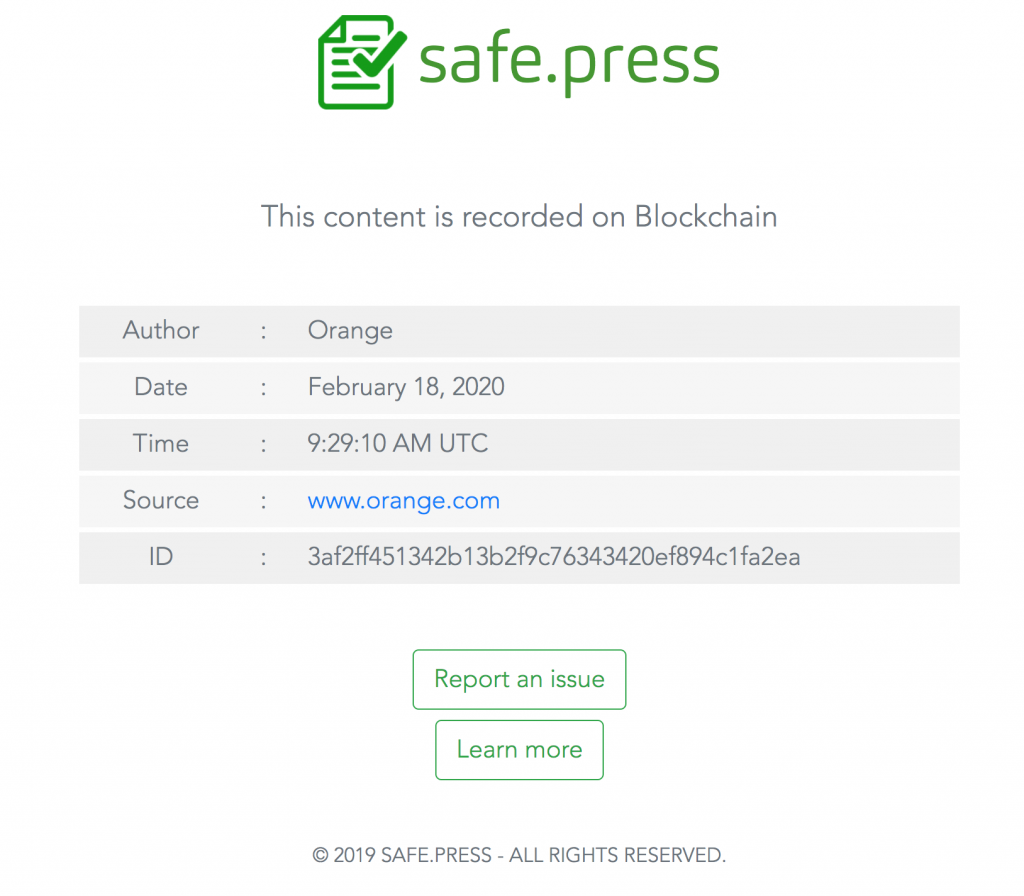 Logistics is an industry that can use blockchain to improve many areas: transparency, accountability, traceability of goods… One study conducted by a company called Oceana showed that almost 87% of seafood is consistently mislabeled. Another report from PwC showed that luxury, pharmaceutical, and electronic brands are prone to counterfeiting, and more than 2% of the world economic output comes from such types of fraud.

A great example of how transparency and traceability is being enhanced by blockchain is the company Treum whose platform was used on a project called Bait 2 Plate, where consumers could not only verify that the yellowfin tuna caught was done in an ethical and sustainable way, but also track the processing and transportation of the fish all the way from Fiji to the plates of a sushi restaurant in New York. To better understand the role of technology here, let’s look at the first step in this process, where the fish was caught and reeled onto the boat: here, an RFID tag was installed and the geolocation of the catch was linked to the Ethereum blockchain. This confirmed that the catch was legal and carried out in sustainable waters. 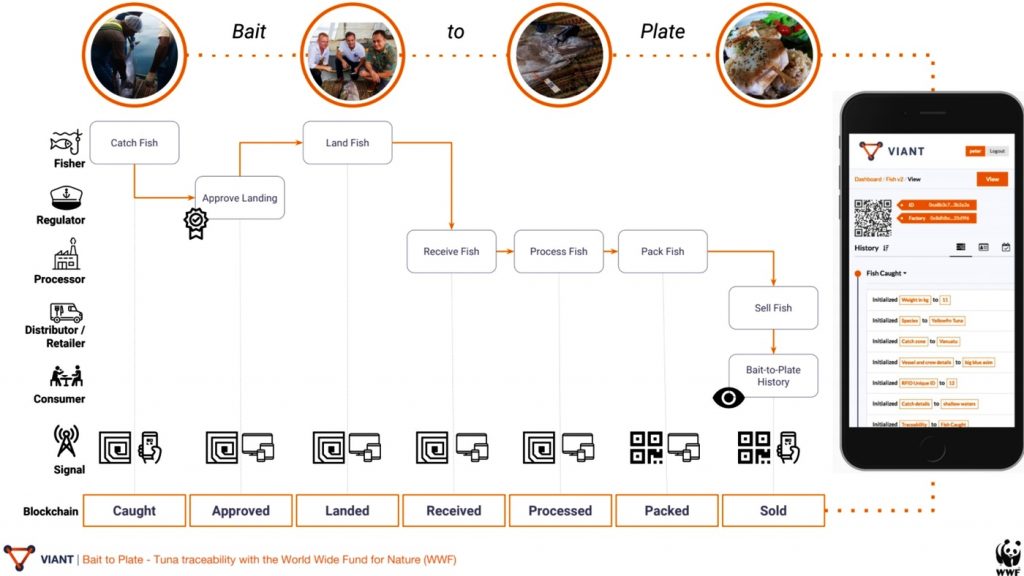 Bonus: What about climate change…?

Glad you asked. Sustainable Development Goal 13 is Climate Action, and the International Union for Conservation of Nature has launched a program to use blockchain to monitor its green list of global conservation areas. Program development manager James Hardcastle states that a lot of these protected conservation sites have a tight budget, so the implementation of such a technology would help reduce financial tensions and transaction costs to ultimately preserve ecosystems more directly.

Over time, the UN itself has also started investing time and money in understanding the technology. For example, they host events in which policymakers and key stakeholders come together to discuss the potential of blockchain in tackling not only SDG 13, but each and every one of the goals.

Next steps: Use blockchain for good

As you can see, we can use blockchain for far more than cryptocurrency. Blockchain is ultimately about giving the power back to the people by encouraging accuracy and accountability. At Rewire Mag, we urge you to explore all the ways we can harness this technology to make the world a better place. 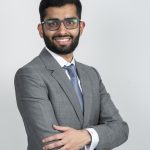 Being born and raised in Dubai hasn’t stopped Shameek Aswani from feeling 100% Indian at heart. He is a dual-degree student currently pursuing the Master in Digital Marketing at HST after successfully completing his MBA at IE Business School. He believes in learning from everything and everyone, a realization which resulted from having lived in 3 different cities in 3 different countries. A truly global citizen. Connect with him here.