An aging rock star, a fork, and a ghost. Challenged with turning these wacky plot elements into a sci-fi short, one team comes out on top at the Golden Stork Awards, an IE tradition.

The Golden Stork Awards are a fun start-of-the-year tradition where second- and third-year HST students from the Bachelor in Communication & Digital Media join communications freshmen to create short films together—with a twist.

The program faculty only gives each group one camera and one afternoon to ideate and shoot their film. Now for the fun part: each group is given four random conditions they must include in the script. In the case of our short film, titled “Again,” we were challenged to create:

With all of these stipulations, it was clear that we had no time to spare. As soon as the opening event concluded, our team rushed to a meeting room and started brainstorming ideas.

Although we all wanted to settle on something quickly and start filming, we ended up dedicating a full hour and a half to solidifying—and writing down—our concept. This ensured that we were all on the same page. Then, we chose a location, grabbed the equipment, and got to filming.

This method proved useful later, and allowed us to understand the different shots we needed to collect, the characterization and acting, and the set design (if you can call throwing things around a living room “set design”). We were also able to bring our idea to life during post-production in a way we had only imagined it before.

All films produced by the students were screened at the closing ceremony of the Golden Stork Awards—an IE tradition that takes place every year—along with an awards ceremony. We were honored to receive 5 out of the 10 total awards. “Again” was awarded “Best Editing,” “Best Cinematography,” and “Best Film,” among others. Let’s just say our team had to take the stage… again and again. 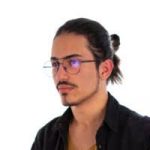 Esaú Gozalo is a student in IE’s Bachelor in Communication and Digital Media. He also worked as a Graphic Design and Marketing Intern for VeraContent.